A Rare Manuscript Map from the Dutch East India Company

With an almost two hundred year history, the Dutch East India Company (known in Dutch as Vereenigde Oost-Indische Compagnie or VOC), was the dominate force in European trade and navigation of Asia in the 17th and 18th centuries. A run of lots in our upcoming Maps & Atlases, Natural History & Color Plate Books auction come from a private collection of maps of Southeast Asia specifically related to trade in the region. The crown jewel of this collection is a vellum manuscript map of the Java Sea by official VOC cartographer Isaak de Graaf. 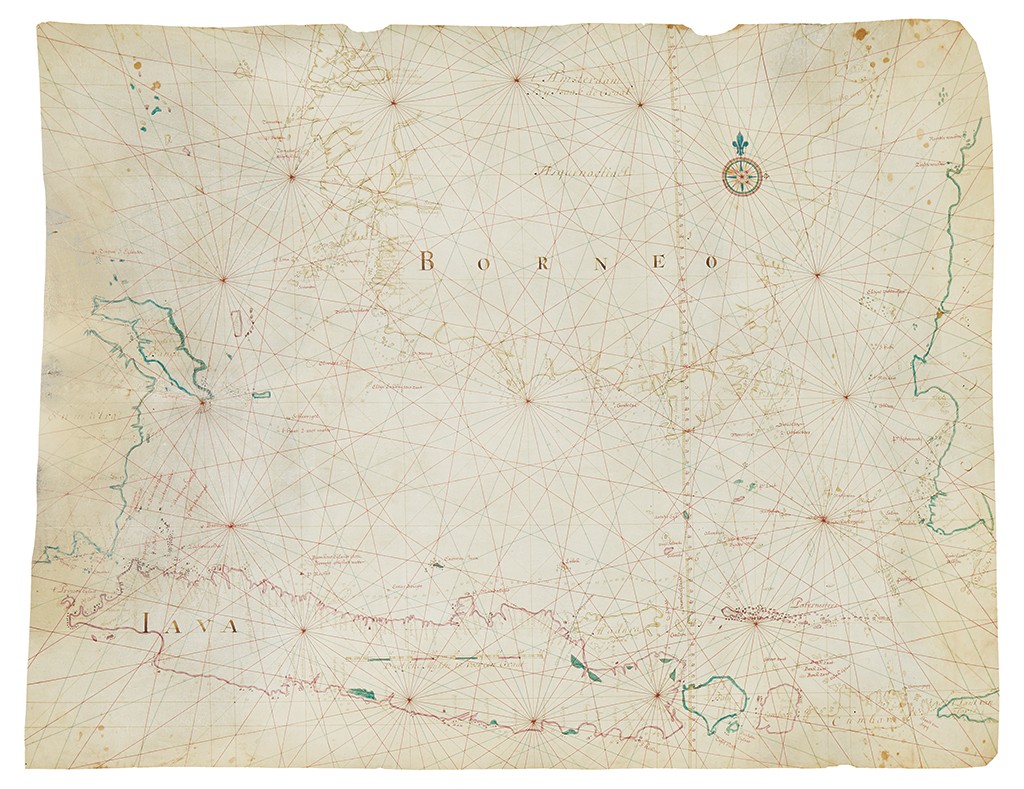 Isaak de Graaf (1668-1743) was the official cartographer of the VOC during the first half of the 18th century, following his completion of a VOC-commissioned atlas of Africa and Asia. His instructions for his role as official cartographer role were to “… correct, improve and amplify the charts for the fleet so that the ships, in service both outward and homeward-bound and in the Indies, might have the best indications, and sail the safest routes so that their voyages may prosper and come to safe completion.”

Surviving VOC manuscript charts are incredibly scarce; old charts were often destroyed when new maps were drawn. This map may also be one of the last produced by de Graaf, who died in September of 1743, the same year experts have dated the Java Sea map to.

The map includes coastal profiles, reef delineations and extensive soundings. It was almost certainly used aboard a ship engaged in trade out of Batavia.

The area depicted in this particular map constitutes what is now a large part of Indonesia and is roughly bounded by the 2nd parallel north, 9th parallel south, 104 degrees east longitude and 120 degrees east longitude. In this way, the map demonstrates the particular focus of Dutch navigation out of Batavia (now Jakarta) and the areas that would have immediately fed into that central port. The map includes coastal profiles, reef delineations and extensive soundings. It was almost certainly used aboard a ship engaged in trade out of Batavia, where VOC ships arrived to deposit cloth, silver and ivory, and load up with cargo like pepper, nutmeg, mace and cloves from the nearby Spice Islands.

While rare, VOC manuscript charts often provide unique insight into history. Another vellum shipboard map by de Graaf, held in the collection of the National Library of Australia, was used last year to help identify the remains of a VOC ship, the Diemermeer, which wrecked off the coast of the Banana Islands, Sierra Leone, in 1747.

For more maps related to trade in Southeast Asia, take a look at lots 33 through 40 in our online catalogue.

A Storied Book with a Fine Association: Henry Roth’s “Call It Sleep”